JUSTIN CHRISTOPHER AYD
"An experimental short about an otherworldly consciousness tapping into our present, monitoring our lives, and extracting our memories." 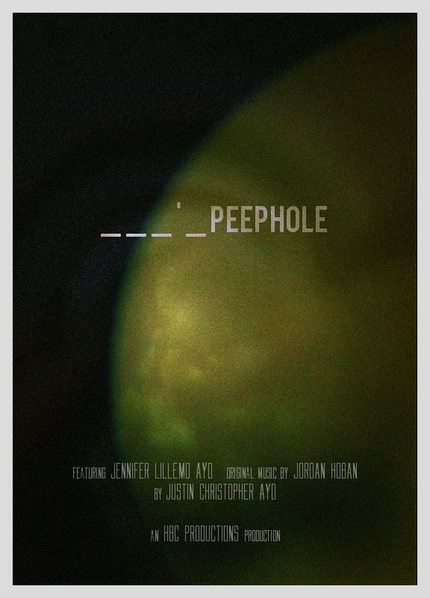 2013 • Color • 9min • Experimental
I stumbled upon making this short experimental piece.  It all started with a photograph I took of my wife one day on a short three day vacation in Two Harbors, MN, and the inevitable posting of that photograph with the following description on Facebook “I call this ‘_ _ _’_ peephole’. Now… go listen to some avant garde paranoid drone-ish type pieces of music, and know this: You Are Being Watched.”

I thought it was unique, but didn’t think about expanding that idea into anything else.

I put forth a simple comment, and decided the best way to convey that comment would be using the experimental format. I’ve only played around with this particular storytelling method once or twice, and never really succeeded. I never dabble in the avant garde, as it’s not my forte, but I am extremely curious about it. Maybe this will be the beginning of a new experiment for me. When between features, I just play. That’s something I should adopt anyway, as it’s great to keep making little films.

It’s somewhat ironic that I happen to be cutting this film on June 27th, 2013 as it was Kryzysztof Kielowski's birthday. I’ll lift a post I made on Facebook that day, “Today, Kieslowski’s 72nd Birthday had he still been living, is the day I’m cutting together an entirely random (and my first) experimental short project; which for, what it’s worth, seems to be in part influenced by his work; albeit subconsciously."

To some extent I’m influenced by his work, and as I was cutting and feeling the almost quaint supernatural aspects in my experimental project, I coud certainly draw a parallel to The Double Life of Veronique, and more obviously the work of Terrence Malick.