JUSTIN CHRISTOPHER AYD
"Three sisters come together over the weekend to celebrate the birthday of their deceased mother." 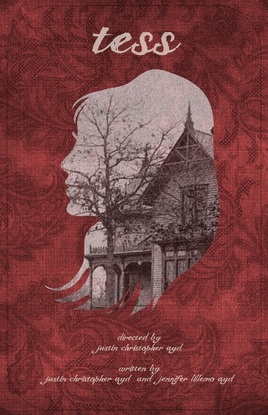 A feature film to be photographed T.B.D.

Tess has been a passion project for me, more or less. The idea behind the story was originally conceived between my first feature Enola (2008) and my second feature Nicotine (2013). I started writing the screenplay in 2010, but eventually, as many writers have experienced, came to a block in the road and got stuck halfway through the screenplay. Instinctually I put the project on the back burner and wrote Nicotine, which was a louder, faster, more aggressive story.

In March 2013, two months after the first public screening of Nicotine, I started back up with Tess, but this time with my wife Jennifer as a writing partner. April 2013 we submitted Tess into the Sundance Screenwriters Lab Workshop. For Sundance we needed to send in the first five pages of our screenplay, an artistic statement, a detailed summary of the story and our bios. Unfortunately we weren't selected to move to round two.